Hip Hop Music Licensing Company, The CorporateThief Beats, is giving musicians a kick-start in their careers by offering high-quality hip-hop beats. Founded by Daniel Hartnett, The CorporateThief Beats is focused on providing rap instrumentals for purchase as well as rap beats for mixtapes and albums. The company makes and sells hip hop beats to content creators, rap artists, singers, and companies.

This Kanye West Instrumental could be great for a freestyle rap artist that wants some thing with a more modern feel and sound.

It has Runaway feel and the rolling 808 with the Dirty Drums followed by the ad libs really put the artist in the mood for that Kanye West Type of Vibe.

About Daniel Hartnett AKA The Corporatethief Beats

From there, he got his first taste of Logic Pro-X which he now uses for 95% of the hip hop beats he produces. After that, Daniel continued his music production education at The Academy of Sound Dublin where he graduated with a Higher Diploma in Music Production and Sound Engineering.

BEHIND THE MAKING OF MY KANYE WEST BEAT ADDENDUM

Daniel, who creates the beats for The CorporateThief Beats understands that having and promoting a musical career can be quite tricky and so many might be at a loss on what to do. This is why alongside beat production, the music producer has used his experience gathered over the years to write and share music marketing advice with his audience on The CorporateThief Beat Blog.

The beat starts with a slightly detuned Spanish guitar melody, which almost gives of a Richard Rodriguez or a Quentin Tarantino movie soundtrack sound.

Kanye is very visual when he makes rap instrumental beats. The majority of his music is influenced by movies and other creative people. I feel that the guitar has the lost errier opening that we get from certain Kanye west type beats like Power. (Kanye West song)

When the drums come into the instrumental you hear that classic rolling 808 with busy industrial drums that Kanye is known for. Once I brought the drums in you still get that classic hip hop instrumental vibe but with that more modern approach with and commercial sound.

I added in various particular male and female vocals that created a political rant type vibe, while the haunting violins bring the rap artist back into that movie sequence type vibe.

The hook is a female vocal that hum's a delicate sound that allows the artist to rap or sing over her vocal. I kept the song structure pretty plain standard verse pre-hook and chorus throughout the beat.

For more information on The CorporateThief Beats, visit his website: 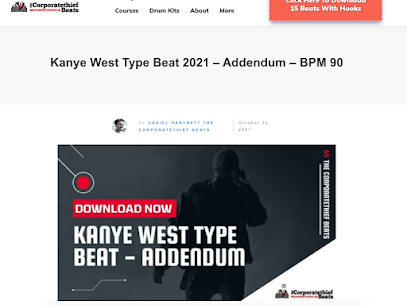