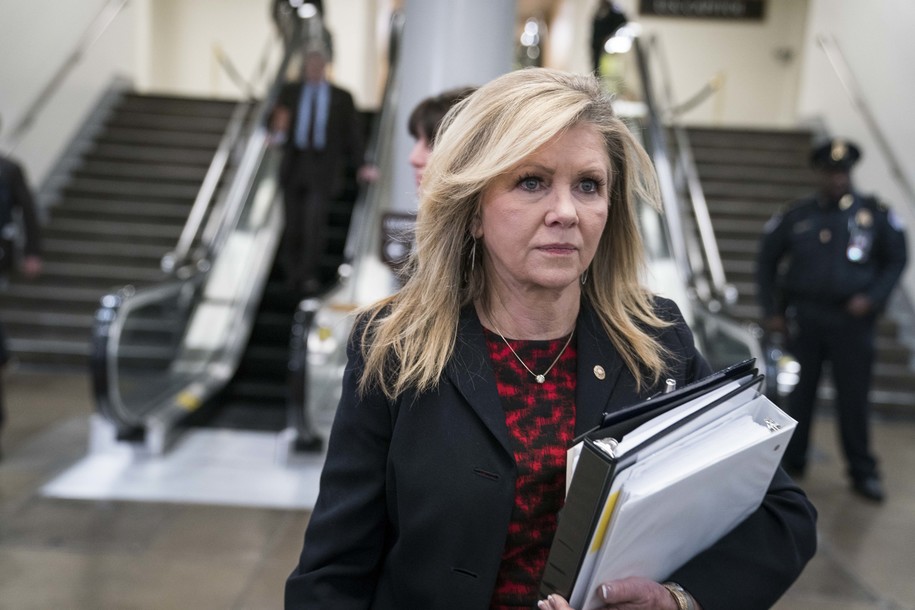 New polling of likely voters from Invest in America and Data for Progress shows that 71% of likely voters support the investment and 19% opposes—that’s a 52 point margin. Even 58% of Republicans support investments in the care economy in general. The polling also tested support for individual components that may be included in the second proposal from Biden for infrastructure: “access to affordable child care, access to affordable care for seniors and people with disabilities, ensuring care workers are paid living wages, creating good-paying new jobs for care providers, and ensuring all workers have access to paid family and medical leave.”

This $400 billion for affordable care for seniors and the disabled garnered the strongest support—79% to 14% opposed. That’s a 65-point margin. So, yeah, the Democrats have reason to amplify Blackburn’s tweet touting this investment. It doesn’t stop at care for seniors and disabled, though, because living-wage pay for care providers, paid family and medical leave, affordable child care, and creating new jobs for care providers all gets 71% or better support, more than 50-point margins.

And here’s a really interesting one.

Caregiving is seen, by a healthy majority of the voting population, as the domain for both the government and individuals and that the public isn’t particularly hung up on what the definition of “infrastructure” is. They don’t seem to have any problem at all lumping the care economy in with the transportation economy—if it all means jobs and a better life, that’s good enough.

This is a partisan poll, to be sure. But that doesn’t make it an outlier. A Morning Consult poll also released this week gives 76% support to the caregiving provision, vying with the 77% approval for the $115 billion for highways, roads, and streets. Notably, the provision that gets the strongest support in the Morning Consult poll is the $18 billion for modernizing veterans’ hospitals. It gets 80% approval. American society wants to take care of each other. Even voting Republicans, though the people they elect don’t seem to get that message.

If the past year has demonstrated anything, it has showed the edge that so many families have been living on for years, without child care or eldercare support, without paid family and medical leave, and without a robust care economy to back us all up. That has been especially true for women who have been disproportionately forced out of jobs in order to care for family members, including homeschooling their kids. It’s not a leap for people to see that infrastructure investment is part and parcel of an anti-recessionary strategy that’s meant to create jobs and address public needs. An investment in supporting human capital—by creating a well-paid caregiving force—does both. It helps create a professional and skilled caregiving workforce with living wages and the support that they need to do the most necessary work. They, in turn, allow the rest of the workforce—especially women—to return to their jobs, earning income and participating in the economy.

On a personal level, so many families have been put in the gut-wrenching position of having to seek care for parents and grandparents—even pre-pandemic. Finding a care home that has adequate staffing, that is responsive to families, that just seems clean and safe and somewhere that can be trusted with loved ones has always been a challenge. What Biden wants to do with this proposal is give families a viable option to help care for the disabled and elderly at home—to allow them even to stay in their own homes. It could mean everything from personal attendants to help with bathing and medications, or shopping and cleaning and meal preparation. It could mean helping people with intellectual or developmental impairments find jobs and live successfully on their own.

The pandemic has so horrifically heightened awareness of our broken long-term care systems. Biden recognizes that the care economy—like the nation’s crumbling roads, bridges, and water systems—has been neglected for too long. He’s also making a bet that the American public agrees. So far, that’s working probably because the pandemic exposed and deepened the fractured care economy.

The public is primed to accept an infusion of government cash and government help because of the American Rescue Plan—Biden’s COVID-19 response. Finally having a government that gives a damn and did something to, yes, rescue us, has shown Americans that it can and should have a much larger role in their lives for the good stuff. Like vaccines. Like a Postal Service that works the way it is supposed to and always has.

So, yes, Marsha Blackburn, that’s what Biden wants to fix. So thanks for helping to promote his plans!